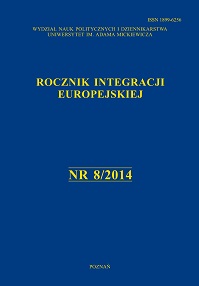 Summary/Abstract: The discovery of large gas fields in the Eastern Mediterranean has resulted in new opportunities in the region, i.e. an increase in investment, in trade turnover as well as in the number of jobs. As far as the political aspects are concerned, such wealth and development potential can encourage politicians to seek peaceful resolutions to international disputes. Yet new resources can also mean new problems, for example, if states begin to compete for them, or for a fair share of income. In the case of Cyprus, both scenarios seem probable. The unsettled dispute affects energy issues, for example, blocking some proposed solutions with regard to gas transit. We can observe three main parties in the dispute, namely (1) the Republic of Cyprus, (2) the Turkish Republic of Northern Cyprus and (3) Turkey. The main aim of the paper is to analyse the influence of energy issues on the position of Cyprus in the region, as well as the Cypriot economic situation and the ongoing negotiation process between both Cypriot communities.