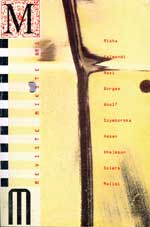 Summary/Abstract: During 1996 M. Kelmende spent six months in the USA, where he worked for "Viktoria", an Albanian TV-station, which is located in the Bronx, New York. This writing is a kind of diary reflections on America, Albanians and the Western world. It has a fragmentary form, almost film sequences. Some characteristic titles of such notes: Life-jacket is under your seat State of Self-Destruction in five seconds I'm loosing my Religion. My Religion. The last station of "D". America with Colors. Has anyone seen Johny's Friend? Only God is perfect. Poetry in Motion The Albanian's Icons The horned Eagle Mother Theresa and the Olympic Games Qosja and Nazi......