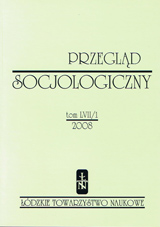 Summary/Abstract: The presence of two various socialized forms of space characterizes contemporary cities in Upper Silesia. These are old and new closed housing estates. The old ones are commonly known as “familok” and industrial housing estates. The new ones are closed areas of rising Polish middle class. Thus, on the one hand we have ghettos of poverty, on the other - ghettos of wealth. Ghettos of poverty resulted both from the outside exclusion and closing of the residents themselves to the possibilities which the outside world offers. The characteristic feature of ghettos of poverty in Upper Silesia is a specific community – community of crisis. This community connects people who have been rejected by the surrounding reality which has better adapted to new conditions. Ghettos of poverty are characterized by social homogenization that is a common script of the resident’s everyday reality which decides about the group’s uniformity and cohesion. Ghettos of poverty, established in close vicinity of steelworks and coal-mines which are being currently closed down, are subject to destruction of housing estates and deepened marginalization of its residents. It is difficult to characterize the ghettos of wealth (gated communities) because they are currently being established, these are already exclusive city areas nowadays. Their specific feature is an internal exclusion, that is withdrawing of their residents from the life of a community. Ghettos of wealth differ from ghettos of poverty in their heterogeneous nature which results from a strong internal diversity of a rising Polish middle class. The lifestyle of these residents, everyday responsibilities and ways of spending free time emphasize the difference. Closing in the ghettos of wealth means , first of all, looking for safety and peace as well as a substitute of community life. These two extremely different kinds of city space are still going to create a specific picture of Silesian cities. We can say that ghettos of poverty are going to transform themselves into an area for underclass and ghettos of wealth are going to tighten their isolation from the rest of the city.