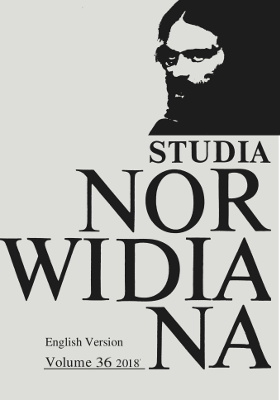 Summary/Abstract: In Norwid’s works one can find distant echoes of the Sufi concepts. One of the threads linking this Polish poet to the current of Muslim mysticism is his fascination with Hafiz’s Divan (and secondly – the person of Abd el-Kader) manifesting itself in Pisma wszystkie. The Persian poet and mystic is mentioned in the works of the Polish author five times (twice in letters and three times in poems: Assunta, Emil na Gozdawiu and A Dorio ad Phrygium).It is quite doubtful that Norwid became acquainted with philarete’s translations of Hafiz’s ghazals (Sękowski, Wiernikowski, Chodźko) in his pre-emigration (Warsaw) period. It was rather the full German translations of Divan (Purgstall and others) and numerous thematic references in the works of German Romantics (Goethe, Heine) that opened to him the gates to Hafiz’s world. Norwid could have been exposed to these during his stay in Berlin in 1846 while attending a query at the University Library there. It cannot be ruled out that also the reading of Emerson’s works during his American period (and later) could be his source of inspiration. The world of Hafiz’s lyric poetry could also spread open before Norwid owing to French translations, although their role was rather secondary, since in the 19th century they were relatively few (only 32 works were translated before Norwid’s death). The years of Parisian emigration provided many new opportunities to advance the know-ledge of Persian literature and culture. This was favoured not only by Norwid’s stay in Paris, but also by the presence, among Polish emigrants, of eminent iranologists with whom Norwid was in touch: Aleksander Chodźko and Wojciech Biberstein-Kazimirski (he worked together with Norwid’s cousin Michał Kleczkowski at the French Ministry of Foreign Affairs). The height of Norwid fascination with Hafiz was in the 1870s, although many facts indicate that Promethidion might already have been inspired by Hafiz. The Sufi “alchemy of love” permeating the stanzas of Hafiz’s Divan found its reflection primarily in Assunta. Norwid took the motto for this poem probably from the French translation of A Grammar of the Persian Language by William Jones (translated by Garcin de Tassy in 1845), in which the couplet was among the examples of Persian syntax (the ghazal in which this couplet originated, was still not fully translated into French). In turn, the epigraph for Emil na Gozdawiu is probably a paraphrase of the ghazal translated into French by the same Jones and included in his Treatise on Oriental Poetry as Ode V. The choice of the epigraph to Emil... testifies to Norwid’s affiliation with an elite group of 19th-century erudite people who were able to get access to the religious dimension of the poetry by Hafiz, which generally remained hidden for the European readers of Divan at that time. A particularly original idea of the Polish poet was the evocation of a text from the area of cultural Islam (and not Christianity!) for polemics with the Rousseauean secular model of upbringing, and the juxtaposition of the secularised European mentality with the deep, unshakable religious sense of the Orient.