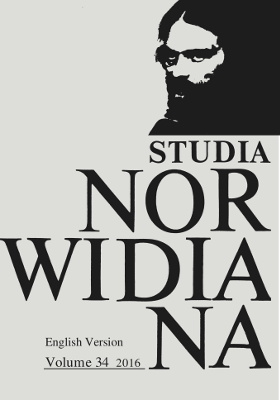 Summary/Abstract: The main message of Norwid’s poem Do Emira Abd el Kadera w Damaszku [To Emir Abd el Kader in Damascus] of 1860 reveals his remarkable affinity for the ideas expressed by Abd el-Kader in his French work Rappel à l’intelligent, avis à l’indifferent. Considerations philosophiques, réligieuses, historiques etc. [Call to the intelligent, warning to the indifferent. Philosophical, religious, historical and related considerations] (Paris 1858). It is highly probable that Norwid was familiar with the text by the Algerian national hero, a mystic and an Islamic saint. The spiritual and intellectual closeness of these two remarkable thinkers of the 19th century is striking. The source of the religious universalism in Abd el-Kader’s thought is the legacy of his own spiritual master – the founding father of Muslim mysticism and the most famous Sufi theologian of late Islam – Ibn ‘Arabi. Norwid’s poetry introduced an idea of authentic dialogue of the West with the Arabic East to Polish literature. This dialogue rested on sound metaphysical foundations and on the universalist premises emerging from both traditions – occidental and oriental. In its weight and depth, this dialogue surpassed all the superficial fads and oriental stylisations typical of the epoch. Norwid and the Arab Emir of Damascus expressed unanimously their anxiety about the dangers that the European contemporaneity faced as a result of the false cultural and civilizational assumptions it decided to rest on. They both strove to reconstruct it in accord with a more promising model. They both believed as well that the reconstruction must begin with closing down (first mentally, then historically) the old time of Eurocentrism and religious exclusivism, to open a new era of global humanism.