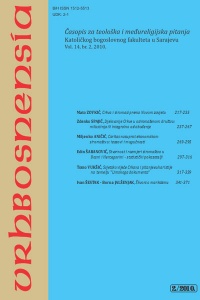 Summary/Abstract: This paper addresses and contextualizes the only Calendar ever found from medieval Bosnia (the Parma Apocrypha: Parma, Biblioteca Palatina, Ms. Parm. 1993) by means of comparative analyses with liturgical calendars of Eastern and Western Christian provenance, placed in the context of a complex religious situation and a lack of material. Establishing the connections between the calendars was a two-way process: on the basis of common feast days, and of the names of saints that occasionally featured in just a small number of manuscripts. The analysis was also extended to other, somewhat meagre local sources, both written and painted, such as deeds issued by rulers and aristocrats (charters and such); the testament of Radin, which also mentions feast days; marginalia in Hval’s Miscellany; selected glosses of the Vrutočko Gospel; and illuminated medieval manuscripts of Bosnian origin. The conclusions arising from this study reveal that, despite the prophetic use of the manuscript, the Calendar was transmitted to this part of the world and transcribed from a liturgical calendar that served as a model, and that its links with local sources relating to feast days are more or less evident. The intention was to correlate the celebration of saints and holy days (even without precise dates) with the Bosnian Church and the religious principles of its members, as to which academic consensus has yet to be reached. This approach was also prompted by a note in the chronograph of the Parma Apocrypha manuscript (the 1370 host desecration / “Hula Krstijam”).