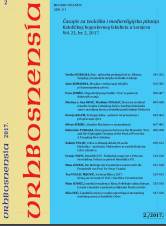 Summary/Abstract: This article deals with the pedagogical relationship between God and human beings through the dimension of God’s creation and the rule of creation towards perfection, with an emphasis on Syrian theological tradition (Ephraim the Syrian). The guideline is the specific language of the Syrian tradition of God as a father-teacher who, through gifts and with love and mercy, teaches human beings how to do good and how to avoid evil. Since this is among the earliest such written work in Croatian, the aim of the paper is to offer some general insights on the topic. With the aim of putting the theme itself in the wider general context of the Syrian tradition, the first part of the paper briefly describes some general features of Syrian theological schools and thought; the middle section offers a short overview of discourse on translations of the Old Testament in the Syrian language, while the third section deals with some aspects of the theology of Ephraim the Syrian. The final section explores aspects of understanding of love and mercy by referring to the example of the relationship between Cain and Abel in which can be found relevant elements of discourse on God as a merciful teacher within the tradition of Ephraim’s thinking.