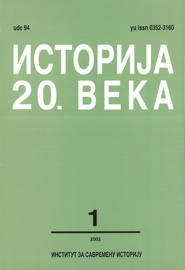 Summary/Abstract: The work attempts to show civil losses in Bosnia and Herzegovina on the basis of the partially revised census „Victims of War 1941-1945”. While counting for 15.7% of the entire Yugoslav population, the losses of Bosnia and Herzegovina represented 32.3% of the total number of war victims, with the civil population accounting for 81.4% of the victims. The Serbs, representing 44% of the population, whose total number objectively decreased during the war, formed 71.9% of the civilian victims. The fact that 81.9% were victims of the Ustashi and that 70.4% lost their lives during the first two years of war clearly indicates the intention to eradicate Serbs in Bosnia and Herzegovina. Despite the fact that Muslims accounted for 31 % of the population, they represented 15.6% of the victims, which places them second according to the number of victims. Exposed to various forms of oppression from the very formation of the Independent State of Croatia, the Jewish community was practically annihilated during the first two years of war. As a result, a community accounting for 0.4% of the population represented 6.8% of the total number of victims, more than 93.8% of which were killed by the Ustashi. Of the three majority nations in Bosnia and Herzegovina, the Croats suffered the least losses, accounting for 3.6% of the victims while representing 22% of the entire population.