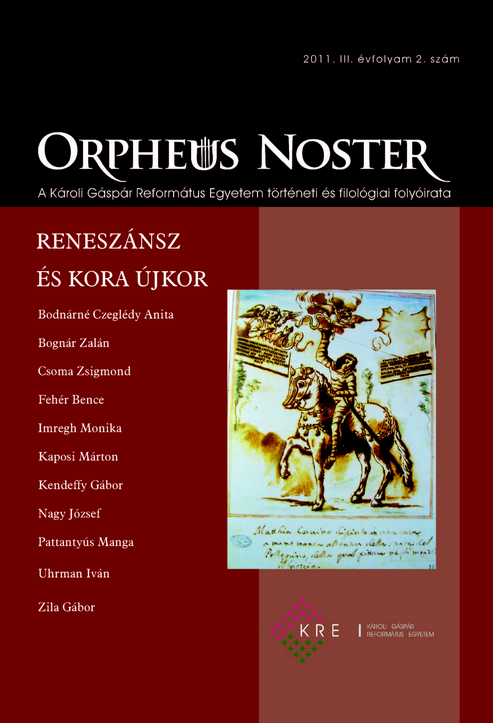 Summary/Abstract: The lack of Hungarian horticultural literature was sorely felt in the 17th-century Transylvania; therefore Princess Anna Bornemisza, wife of Prince Mihály Apafi of Transylvania, commissioned János Nadányi (1643–1707), teacher and pastor, to compose a useable translation on the basis of the relevant late Renaissance literature. Although Nadányi finished his work in about four months, it was published only in 1669; the author felt forced to apologize in advance, probably because he had noticed during the translation process that his sources were not quite up to date. Nadányi’s compilation was based on the works of the renowned late-16th-century French physician and botanist Antoine Mizauld (1520–1578), entitled Secretorum Agri Enchiridion Primum and De Hortensium Arborum Insitione Opusculum, and several other tractates on the medicinal usage of wines and herbs. Although Mizauld’s œuvre was well-known and interesting, it was hardly more than a typical Renaissance composition based mostly on antique authors, even if not without any critical sense. Viewed from Transylvania, these books may have seemed quite modern at the moment; yet a book on the same subject, that of János Lippay, published in the royal Hungary, was far more apt for practical use. The translator had not been interested in the science of horticulture previously; he had to rely on the antique authorities. On top of that, he had to struggle with the insufficiency of the Hungarian botanical terminology, almost non-existent in those days. In the first part, he only adapted Mizauld’s books, but in the next stage of the work, he had recourse also to Asklepios Alexikepus’ Medicinal Garden, another similar work with a strong interest in the medicinal use of the herbage; while the last unit of Nadányi’s book was based on Mizauld’s other tome on viticulture. At the end of his book, Nadányi discussed the medicinal wines too.