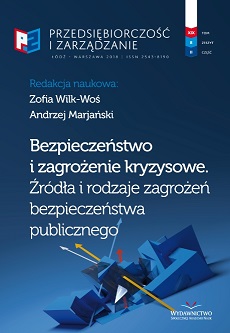 Summary/Abstract: The history of all nations, from the earliest times until now, shows a very characteristic disposition of all state organisms, situated far from the sea, to control the sea coast and to strengthen it. The task of naval forces in peacetime is to safeguard national interests in the seas and oceans, as well as to defend and protect the maritime border. Benedykt Krzywiec has once aptly commented on the significance of a war fleet, namely “A war fleet is a powerful political factor in peacetime, as well as a weapon necessary during the war” . The history of the navy and coastal nations, including those of medium size, confirms the thesis that the governments would try to ensure that their war fleets had the appropriate force of impact. They have been, and will continue to be, the guarantor of maritime border security and effective foreign policy. The time and manner of its engagement are matters for politicians governing a given country. It is the government that shapes the foreign policy of its country. However, these forces should be maintained in proper combat readiness, which in particular demands an adequate number of ships of different classes, as well as highly qualified personnel – and undeniably that is costly. Therefore, not every coastal nation is interested in bearing such costs. Thus, the question arises: What maritime forces should a state have at its disposal? The answer to this question comes down to the statement that, in principle, these should be forces that ensure effective defense of the nation’s vital interests in sea basins. They should be proportionate to the needs arising from the risks, aspirations, and financial capacity of the nation. It is a little-known fact that during the so-called Cold War period, the Polish Navy was actively involved in the foreign policy, on consent of our main ally, the Soviet Union. The author’s aim is to shed light on this issue.