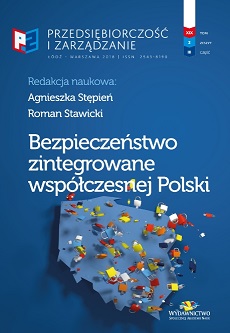 Summary/Abstract: The end of World War I, peace treaties signed there, and the creation of the League of Nations, were meant to ensure peaceful co-existence of the international community. The very same allied powers, which during the peace conference in Paris, France, determined the creation and the shape of borders of both new and existing states, assumed the role of guarantors of such co-existence. In execution of the role they imposed on the perpetrators of that horrific war a number of limitations, mainly with respect to armaments. It is noteworthy that the allied powers barred Bolshevik Russia from talks which was tantamount to its exclusion from political life on the European continent. As it has turned out, that great body of politicians and policy-makers did not avoid mistakes which in diplomacy â just like in football, to use the famous adage â could, and in fact did, come back to haunt them. The whole world, and Europe in particular, after twenty years full of political turmoil both at the state and regional levels, learned that whatever is covered by and signed to in the multilateral or bilateral agreements entails responsibility. Unfortunately Poland was among the countries that learned their responsibility the hard way, and it paid a huge price for such tuition. The interwar years were a time when Poland was trying to find its place on the political and military map of the continent of Europe, knowing well that the only potential ally to back its maritime security up was either the United Kingdom or France. Sadly, the choice finally made proved somewhat unfortunate. At this point, the following question must be asked: If not them, then who? Even in hindsight, to answer this question is not an easy task; enough to say that the political and military situation in the Baltic Sea region in the interwar period was extremely complex. The Polish Ministry of Foreign Affairs enjoyed little room for maneuver in its search for allies. Someone once famously said that the allies should be first sought in one’s neighborhood, but the saying was unknown to the then Polish decision-makers. The effects of their actions proved disastrous for Poland as tested by, and unsurprisingly so, the leaders of the neighboring states, that is Germany and the Soviet Union.