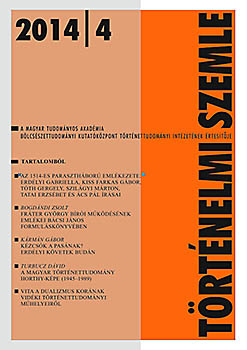 Summary/Abstract: The study examines the role that the peasant revolt of 1514, generally attached to the name of György Dózsa, played in the collective memory in Hungary in the 1840s. It contests the argument according to which alongside the traditional, conservative approach, which condemned the revolt, there would have emerged a revolutionary view, which already presented the events as examples to follow. It argues, rather, on the basis of several contemporary literary works, that there continued to exist in the 1840s an attitude which extended back to 1514 and was influenced by consequent waves of violence, and which, as a result, regarded the peasant revolt as a shocking example and rejected all forms of collective violence. This, however, was certainly not conservative in terms of ideology or the history of ideas, but reflected simply the norm. It was certainly not the reinterpretation of this conceptual framework which started then, and it is totally mistaken to suppose that the new tones in praise of Dózsa emerged with equal force: the examples which apparently prove this are to be assessed in a different way. What, indeed, can be regarded as a novelty is the sporadic yet total negation of the attitude regarded as the norm (as in the gesture of Sándor Petőfi , the most outstanding poet of the period), or its logical transcending (as the Christian salvational approach in the novel of József Eötvös). None of them amounts to a presentation of the Dózsa peasant war as an affirmative example, however, for both preserve a strong aversion to destructive violence.