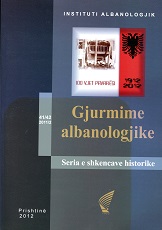 Summary/Abstract: International Conference in Rambouillet regarding Kosovo, even thirteen years later continues to be of interest for certain academic and intellectual circles, not only in Kosova but also in Albania. In this study article is mirrored the echo of writings published in the press of the time in Albania during 1998-1999, where are treated politics of consulting, debates and finally achieved of a consensus offered by international factor, regarding taking a decision as rightful and objective as possible, as primary democratic condition. Furthermore, in the article are mirrored endeavors of Kosovo Albanian population for statebuilding movement, in International Conference of Rambouillet organized on February 6th 1999, in Rambouillet (France), while since 1998, were developed rigorous fighting between Yugoslav military forces and Albanian insurgents (KLA), mirrored in the press of the time in Albania. "The peace of Rambouillet" proposed by basic document of the meeting, marked a relevant success of Albanian political factor. It partially corrected “Peace of Dayton”, and for Albanians was a hope for positive changes in their favor. Regardless the fact it couldn’t give ultimate and merited solution in Albanian National Movement in Kosovo, finally it was a proof of a progress in national evaluation of this issue.