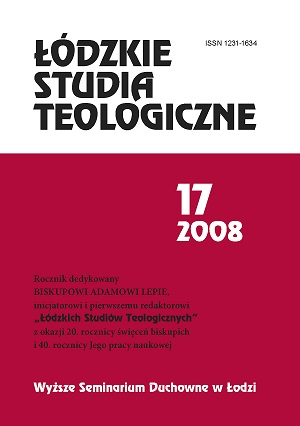 Summary/Abstract: Charitable and beneficial activities meant a lot in the history of Lodz, especially during the First World War and then in the following years of a severe economic crisis. A prominent figure in those times was bishop Tymieniecki, who was in charge of the new Lodz diocese. During the war he worked in the Custodial Council in Lodz . In 1915, on his initiative, there was organized Cheap Hygienic Canteen for Intelligentsia. He also organised two shelters for the homeless and for children. It originated the Association of Saint Stanislaus Kostka’s Shelters. After the war he did his best to protect and help poor children. He supported „A Drop of Milk Association” and organized summer camps for poor children of Lodz. Bishop Tymieniecki also brought a women convent to his diocese and the nuns immediately got involved in working for charity. On February 1931 he set up a committee whose aim was to help the poorest and consequently on his initiative parish committees sprang up. Bishop Tymieniecki developed the activities of Caritas and cooperated with governmental and local institutions to protect and help the poorest. He draw attention of prominent people and institutions in Lodz to the needs of the poor. The genuine priest of working class in Lodz, he regarded charitable activity as one of the main tasks of pastoral work. Without it, there is no real religious life and the life of the Church dies out, he mentioned.