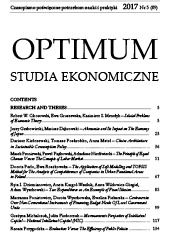 Summary/Abstract: Ever since Poland joined the European Union, the citizens of Ukraine have been increasingly interested in permanent employment in Poland, and many of them have actually found jobs in our country. Until recently, workers from Central and Eastern Europe were seasonal employees, working in agriculture or performing other simple physical work that did not require qualifications or experience. Later, however, countries such as the United Kingdom, Sweden or Norway began to attract hardworking and well-qualified employees with high salaries. As a result of the migration of numerous Poles, the domestic labour market began to experience a chronic lack of staff. At the same time, migrants from the East started to manifest an increased interest in the Polish labour market. The largest ethnic group employed by Polish employers over the years are the Ukrainians. Because of the recent war, political tensions and the difficult economic situation in Ukraine in 2014, the number of Ukrainian migrants in Poland has been constantly growing. The main goal of the present paper is to analyze the importance of Ukrainian citizens' migration for the development of the Polish labour market. The main questions considered by the author are related to the causes of Ukrainian migration to Poland, the attractiveness of the Polish labour market for Ukrainians, with attention to regional differences. Moreover, the share of Ukrainians in the Polish labour market is analyzed in terms of gender, migration period, conditions of employment, and chosen survival strategies in foreign labour market.