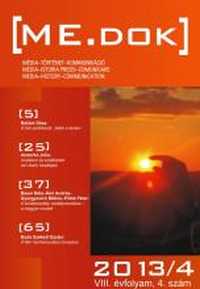 Summary/Abstract: It is almost impossible to reconstruct the history of the Roma (Gypsies) living scattered in Hungary. After the regime change, 4 feature films have hypothetically under taken the task to dissolve the close and repeated system of prejudices: two of them offering a possible authentic reading to the permanently generating “ethnic war” of “us and them”, and existing practically without a copy (Sitiprinc, Chacho rom); and two as successful winners of the diluted aesthetics/demand of the midcult audience (Romani kris, Megy a gőzös [The steam-engine goes]). The double identity (Hungarian-Roma) Sitiprinc/Börtönherceg (The Prison Prince, 1992) happens in the time of the robbery and homicide at Dámos (1907), based on the memories of Rudolf Horváth. The only feature film of authors Edit Kőszegi and Péter Szuhay is interesting because of the presentation of authentic life styles (the galati Stanescu family in Transylvania, the Romanian Orthodox double-confessioners).