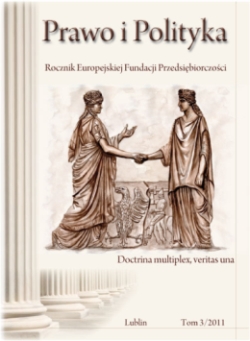 Summary/Abstract: The paper is concerned with the problem of the reform in the United Nations Security Council (UNSC). The author presented the historical and the contemporary aspects of this subject. The article is divided in five parts devoted to particular issues. In the first part basic concepts and conditioning of the problem were discussed. In the second part of the text the author concentrated on analysis of the principles of projected reform of the UNSC. The third part of the paper was devoted to discussing over the problem of the UNSC legal aspects. In the fourth part of this text the author tried to analyze and sum up reasons why the reform of the UNSC was a big failure. In the final part recapitulation of made findings were outlined. It is worth emphasizing that the author of the article in the course of a research proceeding has reached a conclusion that the UNSC reform is as needed nowadays as hard to achieve by the major players in world politics.