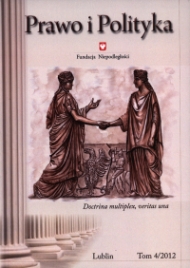 Summary/Abstract: The paper is concerned with the problem of the institutional relations between North Atlantic Treaty Organization and the European Union at the turn of the twenty-first century. The author presented the conceptions of NATO-EU cooperation. The article is divided in five parts. In the first part basic concepts and conditioning of the problem were discussed. In the second part of the text, the author concentrated on analysis of the historical aspects of the Cold War transatlantic cooperation. The third part of the paper was devoted to discussion over the question of the collapse of bipolar model of the international security and its meaning to the NATO-EU relations. In the fourth part of the text, the author presented the contemporary aspect of the US-EU cooperation after the WTC attacks. In the fifth – and final part – recapitulation of made findings were outlined.