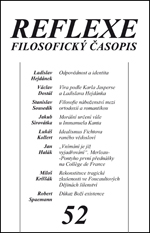 Summary/Abstract: The article demonstrates that liberal theology, as represented by Schleiermacher, is not a new form of Christianity, but rather marks a separation from the earlier dogmatic tradition. What is characteristic for Christian orthodoxy is a “propositional understanding of revelation”, consisting in sentences addressed by God to mankind. Against this background, faith presupposes philosophical justification of God’s existence. This conviction was rejected by Hume and Kant and the rejection subsequently provoked two types of reaction: among Catholics, it led to a renaissance of the Aristotelian-Scholastic philosophy, whereas among Protestants, Schleiermacher attempted to transfer the essence of Christianity into subjectivity. In fact, however, such a subjectivized religion is a negation of Christianity. An analysis of human subjectivity shows that the solution to the problems of human condition can come only from really existing God.