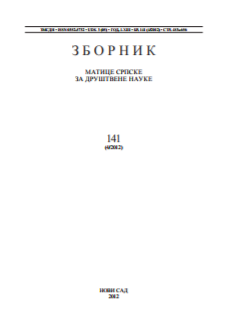 Summary/Abstract: It is generally accepted that the first European regional state was Italy (since 1948), and the second was Spain (since 1978). This article, however, proves that the first European regional state was the Kingdom of Yugoslavia (1921–1939). The Kingdom of Yugoslavia as a regional state was formed in imitation of the Union of South Africa (since 1909). The main proponents of the concept of Yugoslav regionalism were Bogumil Vošnjak, a Slovene, and Josip Smodlaka, a Croat from Dalmatia, both of them considered moderate nationalists. Regional jurisdiction in the Vidovdan Constitution was modeled according to Smodlaka’s and Vošnjak’s ideas. Law on the name and the administrative division of the Kingdom from 1929 established administrative areas (banovinas), whose jurisdiction mostly coincided with regional jurisdiction. Banovinas were also carried to the Constitution of 1931, provided that, with respect to self governing bodies, they were somewhat shaped by the ideas of Stojan Protić, „a moderate Serb“. The territories of banovinas were shaped according to Smodlaka’s draft, so they were much larger and economically stronger than previous (oblasti). When we compare the standard regional jurisdiction (designed according to the Spanish Constitution of 1978) with the jurisdiction of Yugoslav counties or banovinas, we can conclude that they are almost identical. So, considering the time priority, the Yugoslav Kingdom was the first regional state. However, it was an inadequate form of a state due to the presence of strong nationalisms, primarily Croatian.