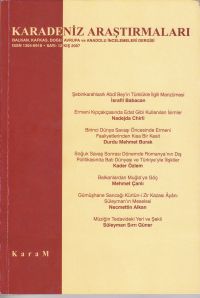 Summary/Abstract: At the end of the Cold War, Romania changed its foreign policy perspective from the East to the West. Important changes occurred in Romania as a direct result of its decision to choose becoming a member of EU and NATO as its first priority. The EU and NATO encouraged Romania to establish a democratic system and to make reforms in the areas of politics, economics, and security. Furthermore, the relations between Turkey and Romania made a good progress in the period after the Cold War when compared to the past as a result of orientation towards the West in terms of foreign policy of Romania and regional issues. This article examines the journey of Romania to the West and its relationship with Turkey and the Western World after the Cold War. In addition, to understand Romania's current foreign perspective, it was necessary to explore the political history of the country.