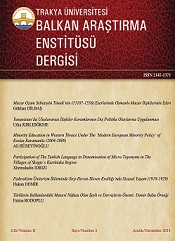 Summary/Abstract: While the regions, which are increased in importance after collapsing of bipolar system like Balkans, have entered into crisis process in new period; on the other hand, global actors have been more interested in these areas. Balkans for the US, even if has not been evaluated as a preferential benefit area in post-Cold War; being late of European states for intermeddling to the crisis, which were occurred in collapsing process of Yugoslavia, caused military interferences of the US by using NATO. Balkans has always a different meaning for Turkey by the effects of political, ethnics, geographical, historical, religion factors etc… The purpose of this study is to examine the policies in regional crisis’ of the US and Turkey from a comparative perspective.