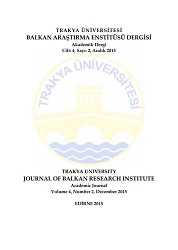 Summary/Abstract: Turkey and Bulgaria, being two neighbor countries, have strategical importance for each other in terms of political, economic, cultural, geographical and social aspects. Although the incidents in the historical process create a confidence problem, there have been positive political, military and economic developments in bilateral relations because of the structural changes in foreign and internal policies of Bulgaria after the end of Todor Zhivkov regime. In this, Bulgaria’s renunciation of the assimilation policies towards Turks in 1980s has been main factor in thatregard. The bilateral relations have developed rapidly after the Zhivkov period and this trend continued in 2000’s as well. The aim of this study is to examine the relations between Turkey and Bulgaria with the political, military, economic and Turkish minority dimensions in the period of Justice and Development Party (Ak Party).