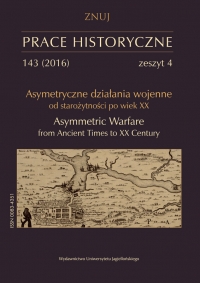 Summary/Abstract: The identity of Poles in Austrian Galicia has often been the subject of discussion and probably will yet be addressed repeatedly. It is the theme not only important for understanding the Polish history, but also fascinating because of its context, which is the richness of identities that existed in Galicia. Most studies of this issue are focused not so much on Polishness in Galicia as on the Galician identity of the local Poles. Such an approach does not seem to be accurate, because it suggests an organic compound of the identity formation processes in Galicia and national transformations in Austria, of which Galicia was a political part. Meanwhile, although such relationship existed – economy, political system and culture were the pan-Austrian framework for these processes – but it was a minor circumstance. Poles, Ruthenians, Jews and Armenians, the four linguistic and religious communities, which Austria found in her partition of Poland in 1772, which she had an ambition to direct and whose identities she wished to transform, shaped themselves first of all in relation to each other, that is, within Galicia; then in relation to the heritage of four centuries of common exis¬tence in pre-partitioned Poland; and finally, in the third place, in relation to some external factors. The ethnic policy of Austria was just one of these factors. If that policy had been consistent, and if Austria had had the power to effectively lead the work of building a common nation across historical boundaries, we could talk not only about the existence of Galician but even Austrian Poles. But Austria, alternately manipulating and arriving at compromises with respect to the national processes within her territory, failed to master the ethnic history of the lands which she owned in the political sense. For various reasons, she failed to take advantage of the modern framework in which these processes took place, and that could have led to her eventual nation-building ambitions. As a result, the Polish culture in Galicia became the leading model and a reference point for the majority of local ethnicities. There were no significant cultural and political differences between the Polish residents of Galicia and the Poles from other partitions. There were only regional differences in terms of mentality and customs, fading fast after 1918. There was no separate history of Poles in Galicia, only the Galician circumstances and Galician reception of national history: the same events, the same cultural, ideological and political phenomena, the same actors. There was not even the temptation to formulate a program of building the Polish independence in Galicia as a separate state in relation to Russian and Prussian Poland, as there was in the case of Galician Ukrainians. A Galician Pole is a concept illegible today, and once had the character of a cultural stereotype, which, however, has not transformed into a permanent cultural fact.