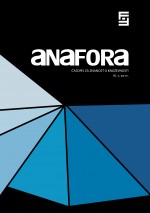 Drakula u zrcalu: Upisivanje ideologije u gotički roman
Dracula in the Mirror: Ideology and the Gothic Novel

Summary/Abstract: Bram Stoker’s Gothic novel, Dracula can be seen as a political text which comments on the social and political reality of Victorian England. The novel relies on the aesthetics of transgression both in its structure, which is epistolary and provides for multiple points of view, and in its contents, which describes the appearance of a supernatural being – the vampire. Supernatural events and characters symbolize the fear of moral decline that may occur as a consequence of contact between the dominant Victorian culture and colonial cultures, enabled by Britain’s colonial endeavours. The character of Dracula functions in most cases as a part of the subtext, a danger one does not see, but feels. He is a symbol of the fear of potential reversed colonialization and of the dangers of female emancipation, both of which represent a threat to the anglo-centric patriarchal hierarchy. As such, Dracula (and the contact with the East that he represents) symbolizes a threat to the tradition and stability of the British Empire which finds itself in a schizophrenic situation: on the one hand, Britain desires the new, as is seen through the scientific and technological progress, as well as progressive cultural phenomena, such as the idea of female equality. On the other hand, the promising future is burdened by an uncertainty that scares the British as it represents a step away from the position of a symbolic center of imperial power and away from patriarchy. Stoker’s novel is thus revealed as one of key texts which, paradoxically, represents Victorian ideology through the representation of ultimate otherness in the form of a monster.