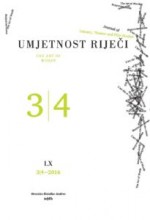 Summary/Abstract: The paper explores the idea of home as treated in two dissimilar texts representing distinctive genres and literary traditions: Lorraine Hansberry’s play A Raisin in the Sun (1957) and Nick Hornby’s novel How to Be Good (2001). Hansberry’s male protagonist Walter and his African-American family are on a literal quest for their own home, which is at the same time Walter’s quest for maturity and his masculine identity. Hornby’s first-person narrator is Katie Carr, middle-class woman and a medical doctor, undergoing a mid-life crisis, expressed in her desire to get divorced and live alone, away from her everyday familial struggles and duties. Despite the two protagonists’ obvious contextual differences (gender, race, class) their journeys seem to converge at one point: both of them eventually come to find peace in domestic security. Focusing on issues of home, class, and gender, the analyses of these two texts point to the idea of home as a site of acceptance, inclusion, security, and maturity for the protagonists, despite the fact that home is, and remains, a political space. Both play and novel depict their respective protagonists in reversed gender roles, possibly suggesting that most of the existing criticism connected to home and gender overlooks the possibility that home, although inevitably political, may still be a place of refuge, safety, and even personal growth. Both texts signify the universal importance of home, which gives their protagonists roots and safety (regardless of gender) symbolized in the forms of a material home (a house), and the mental states of home (a sense of belonging to one’s family) and homeliness.