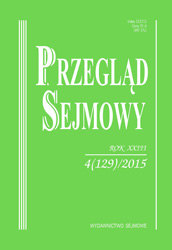 Możliwość instytucjonalizacji związku osób tej samej płci w świetle art. 18 Konstytucji RP
The Possible Institutionalization of Same-sex Partnerships in the Light of Article 18 of the Constitution of the Republic of Poland

Summary/Abstract: The study deals with the normative content of Article 18 of the Constitution. This provision is a norm requiring heterosexual marriage surround be placed under the protection and care, but does not prohibit the institutionalization of sexual relations of two persons of the same sex by the ordinary legislation. The consequence of the recognition of an autonomous character of the term “marriage” at constitutional and statutory levels and rejection of the view that the institution of marriage is formed by the constitutional lawgiver in Article 18 would be the possibility of same-sex marriages being allowed by ordinary legislation. In interpreting Article 18 of the Constitution, one should also take into account other constitutional provisions, in particular Articles 32 and 47 of the Constitution. The right to conclude a legally effective civil partnership with the person on whom he/she bestowed his/her affections and shared his/her lot with, is an element of the right to decide about one’s personal life, which is conferred also on homosexuals.