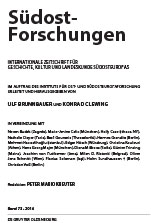 Summary/Abstract: This paper follows “Balkan Vienna”, a media phenomenon as well as a media construct created both by the Viennese press and from the perspective of the Balkans themselves. The decline of the once brilliant capital of the great empire into a hotbed of revolutionaries and terrorists was recorded in Belgrade with scorn and fear. In Vienna, the press addressed these events in terms that sought to distance the capital from the southeast. However, at the same time the Viennese press admired the political activists from the Balkans, exoticising them as heroes. Thus, the press externalised Austrian domestic contradictions through their discussions of Balkan politics. By reporting scandal and sleaze, the press perpetuated the image of Vienna as a refuge for revolutionary activities and “typical Balkan” violence. “Balkan Vienna” is thus a social and political place, one of local, national, transnational, Balkanic and European linkages. As such, it is part of a new discourse, which relocates the internal and external view of Vienna and Austria on the mental map of Europe.