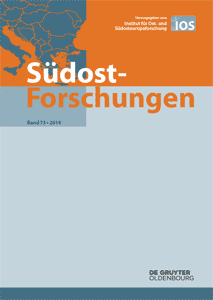 The journal “Südost-Forschungen” (Southeast Studies), which has appeared since 1936 in the form of a yearbook, is the Institute for East and Southeast European Studies' publication medium for covering historical research on Southeast Europe. Interdisciplinarily conceived, the journal is open to contributions on subjects ranging from the Byzantine era to contemporary history. In its very comprehensive review section ‟Südost-Forschungen" gives a broad overview of the current specialist literature in all relevant languages. Worthy of emphasis is the internationality of the authors, and especially the large number of contributors from Southeast Europe among them.