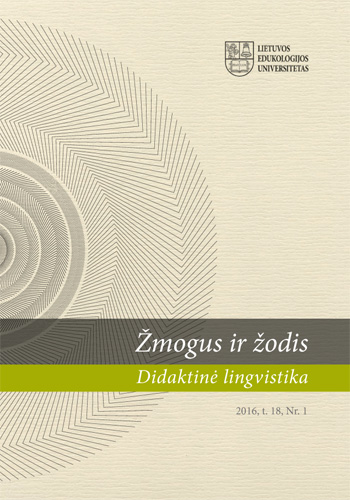 Summary/Abstract: A rapid spread of modern technologies determines a notably rich flow of new loanwords in computing. The article analyses the tendencies of adaptation and integration of new loanwords into text in computing as well as discusses the reasons of arrival of loanwords into the Lithuanian language, their functions in a text, origin, and semantic groups. The study material is represented by 248 loanwords in computing, their 479 variations forms, and 803 examples illustrating their usage. The study material is analyzed using descriptive-analytical and comparative methods. Quantitative analysis is invoked in highlighting the tendencies of adaptation and integration of computing loanwords into text. The study is absolutely relevant in the context of computing discourse as well as in the borrowed lexical context of the past decade. This is the first thorough and coherent study of new loanwords in computing reflecting the peculiarities and tendencies of their real usage. According to the study data, the majority (88 percent) of new title loanwords in computing adapt to the Lithuanian language system to the maximum; they possess an orthographically and morphologically functioning form, which completely conforms to the Lithuanian language system. The use of orthographically adapted computing loanwords is the rarest (1.2 percent of all titles). It is noteworthy that the real tendencies of the study area loanwords are reflected through the variability of loanword forms. The study reveals that almost a half (47 percent) of loanword forms used in computing discourse is adapted both morphologically and orthographically. Slightly more than a fourth (27 percent) of the analyzed forms is represented by the authentic expression of computing loanword forms which are not adapted at all. The abundance of the usage of the authentic expression of computing loanword forms is determined by the specification of the usage itself: the computing discourse contains a number of symbolic names, such as programs, tools, buttons, social networks and other naming. The analysis of the study material shows that new computing loanwords are usually (62 percent of usage cases) integrated into text graphically: the loanwords are distinguished by using italics, quotes and/or brackets. Less frequently (38 percent cases), a computing loanword that is new, unknown or partially known to an addressee is explained through metalinguistic comments.