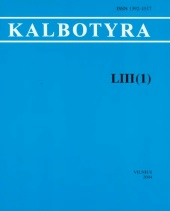 Summary/Abstract: The analysis showed that the emphatic forms of the singular nominative case dominated in the "Ziwatas" (1759) dialect probably due to the impact of the church tet. According to the orthography, the singular accusative forms of the demonstrative pronouns had still preserved a nasal voel. The pronouns anas, ana were already used as personal pronouns instead of jis, ji.