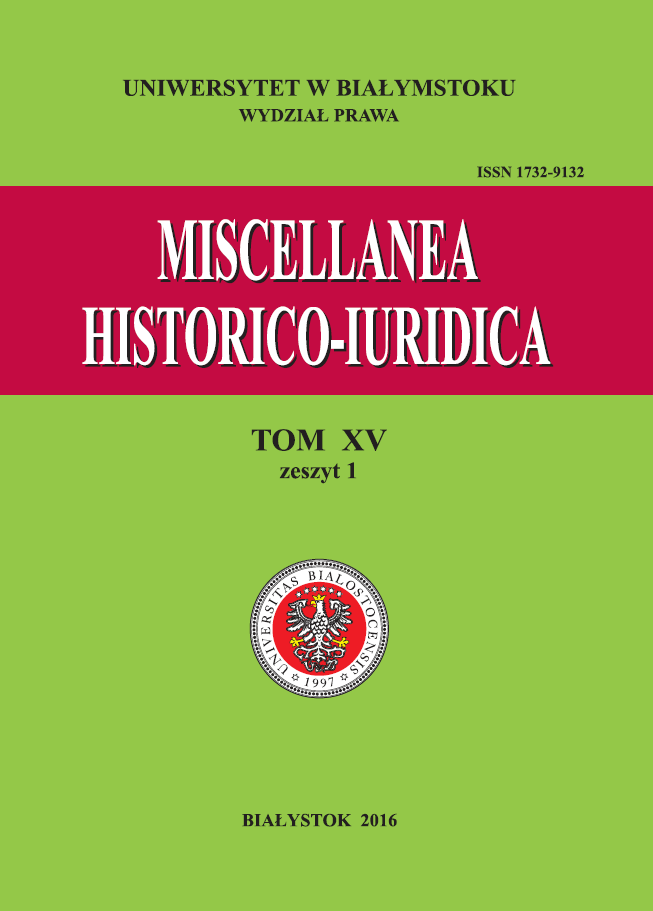 Summary/Abstract: During the reigns of Augustus II and Augustus III (both Polish) – the Lithuanian Commonwealth’s armies were modernized. As early as during the Great Northern War the armies were equipped with relatively modern military devices, and within the following decades efforts were made to keep the equipment in line with European standards. As far as the financial and organizational aspects were concerned, the most significant were the reforms of the Silent Sejm from 1717. Moreover, it was signalled that the military law should be thoroughly modernized by means of developing general and detailed codes determining the rules of military service and principles of everyday life for the soldiers of both Commonwealth’s armies. Although a few, or perhaps several drafts of such codes were developed, what finally happened was that the military law applicable in 1753-1755 was codified (three codes, two of which were prepared for printing by Samuel Brodowski), and foremostly, three new normative acts regulating the principles of organization and discipline in the Commonwealth’s army were issued. One of them was authored by Augustus II, who in 1698 announced new Military Articles. His son and heir to the Commonwealth’s throne, Augustus III made an attempt to modify those articles by means of issuing his own War Articles in 1749. However, it does not seem that they were widely adopted in the royal and Lithuanian armies or that they supplanted the articles of Augustus II. They shared the fate of an earlier attempt made by Augustus III in order to modify the applicable military law, i.e. the Articles for artillery issued in 1737. In fact, the only proof of their existence is the royal diploma establishing those articles stored in the National Archives in Cracow and reprinted in this article. I did not access any source materials confirming that the articles of Augustus III were presented to artillery officers in either royal or Lithuanian armies, or that they were ever applied in the court practice. From the preamble it may be concluded that the articles were published at the request of the head of the Polish artillery, Zygmunt Adolf Rybiński, and developed on the basis of the royal articles for artillery from the first half of 17th century. In fact, although there were numerous common elements with the articles issued by Władysław IV, their construction and number of paragraphs were different, and most importantly so were the definitions of disciplinary rules and the punishments catalogue. In fact, the articles of Augustus III were modelled upon the normative acts regulating the provisions of criminal law applicable in the Saxon army artillery. However, the obligations imposed upon the soldiers, the same as in the case of other military articles announced for the Commonwealth’s army since the mid-16th century and by the 1780s: loyalty to the King and the Commonwealth; absolute obedience to the King and all army superiors along with following their orders; diligent fulfilment of duties, especially during watch and war time; taking good care of military equipment; modest and proper behaviour within stationing and accommodation sites. The articles also regulated the principles of concluding marriages, which was only possible upon obtaining permission from the superiors. The articles also strictly prohibited initiating riots, brawling among the soldiers, duelling, causing harm to the civilians, committing criminal offences, cowardice or desertion while facing the enemy, spying for the enemy and destroying public utility facilities along with mills, ploughs and bakery ovens both within the territory of their own and enemy countries. Failure to comply with the obligations and duties resulted in severe punishments, both financial and corporal, imprisonment combined with heavy physical work or even capital punishment.