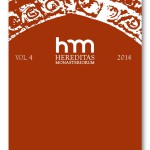 Książki poddane w 1841 r. cenzurze prewencyjnej. Przyczynek źródłowy do dziejów bibliotek klasztorów skasowanych na mocy ukazu z 1832 r.
Books subject to preventive censorship in 1841. A source contribution to the history of the libraries of monasteries dissolved under a ukase of 1832

Summary/Abstract: In the research on the dissolution process and the legacy of the monasteries suppressed in the territories of the former Republic of Poland, annexed by Russia between 1772 and 1815, of incalculable value is the archival heritage of the Roman Catholic Section of the Department of Religious Affairs of Foreign Denominations at the Ministry of Internal Affairs (fond no. 821, description 125), kept at the Russian State Historical Archive in St. Petersburg (Российский Государственный Исторический Архив). The bulk of the records it comprises concerns the allocation of the monastery property seized in the 1830’s by the state: buildings, land, capital, and movable property, including archives and library collections. The tsarist administration initially did not recognise the material and cultural value of the latter, but as soon as in 1830’s it revised its stance. Having become acquainted with the former library collections, the officials of the Ministry of Internal Affairs, the Ministry of State Domains and the guberniya administration discarded the idea – put forward by the treasury offices – of selling off the books at public auctions, arguing it was rather unfortunate. After the claims lodged by the Roman Catholic Church, the Orthodox Church, and the Ministry of Public Enlightenment were taken into consideration, it was decided that the former monastery book collection be distributed among theological academies, Roman Catholic parishes and seminaries, secular schools, and public libraries. The decision was taken between late 1830’s and early 1840’s, and the local administration was entrusted with its execution. Not all books from the monastic libraries were eventually transferred to the institutions they had been designated for. A certain part was subjected to preventive censorship by the guberniyas committees. They isolated from the collections the books of political nature discussing the history of the state and law in the Polish- Lithuanian Commonwealth, the history of the Roman Catholic Church, as well as theological works which criticised denominations different from Catholicism: not only the Orthodox faith, but also the Protestant ones. The extant records barely allow to estimate what part of the monastic collections underwent this sort of preventive censorship. In the Vilnius, Minsk, Grodno, and Białystok general governorates, over a hundred books with dissident – by tsarist officials’ reckoning – content were removed from the collections of 17 former monastery libraries alone. The model adopted in 1842 was used in years to come as well, thus increasing the number of books submitted to preventive censorship. It remains unknown whether they were scrutinised by censorship officials and what decision was finally taken as to their fate; further archival research would be needed to verify it. This could undoubtedly be facilitated by an annex providing a list of books subject to preventive censorship in the Vilnius general governorate in 1842.