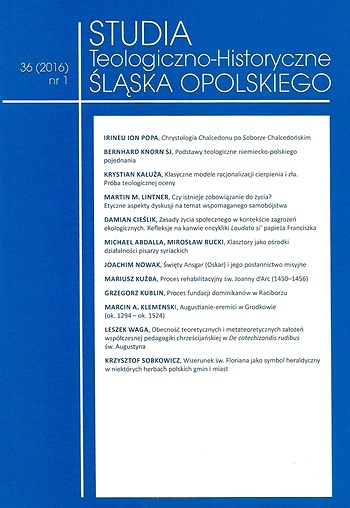 Summary/Abstract: The Dominicans, approved in 1216, by Pope Honorius III, very quickly spread, having already twelve provinces by 1228. According to John Andrew Spież, in 1221 St. Jack and his companions, the Brothers Preachers, came from Italy to Kraków, hosting first the court of the bishop of Kraków – Iwon Odrowąż. Then on March 25th 1222 they lived at the St. Trinity Church in Kraków. These events are credited as being the seedbed of the Polish province for the Dominicans. In 1224 or 1225 the Polish provincial head was Gerard of Wrocław, which had sent the brothers to Wroclaw, Prague, Kamień, Płock, Gdańsk and Sandomierz. Since that time, we can talk about the existence of the Polish Province of the Dominicans, which also includes the area of Bohemia and Moravia. In the thirties and forties in the XIII Century they built more monasteries, including Racibórz. The arrival of the Dominicans to Racibórz can be dated to the years 1241–1244. They owned a house in the city and the early St. Jacob’s church. The founders of the monastery were the Princes of Opole, Mieszko II Otyły and Władysław I and their mother Viola. The creation of the Dominican convent in Racibórz may have taken place in 1243 or 1244. A document from October 29th 1245 contains information about the first donation of Prince Mieszko II Otyły to the Dominicans in Racibórz, it also contains information about their Prior as well as lists of the names of eight monks. It can be assumed that by 1255 construction (or reconstruction) of the monastery was completed as well as St. Jacob’s church, according to the needs of Dominicans. Although the so-called foundation document was not issued until April 14th 1258 and it is this document which provides information concerning the founders of the monastery and its original salary. Database sources enable the capturing of data concerning the oldest religious incomes in Racibórz.