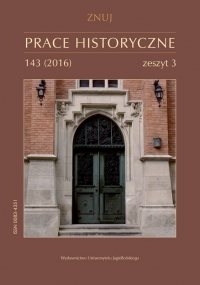 Summary/Abstract: The First World War was an extremely difficult challenge for services and offices responsible for supplying the soldiers fighting on the front as well as all the citizens working at the rear of the front line. The decline in food production during the war forced the belligerent States to use top-down mechanisms to reduce the demand for food. The most commonly used method of adjusting the demands became food rationing during the war, as well as the promotion of food substitutes instead of deficit products like meat, sugar and fats. In the course of war, the inhabitants of European countries became aware of a new, previously practically unknown, role of the States – as a controlling factor of their daily eating habits. Changing these habits during the war opened up new prospects for the implementation of dietary programmes in society as a whole. Food storage experiences of urban population and the use of extended durability products in everyday life were building a survival strategy for future economic crises.