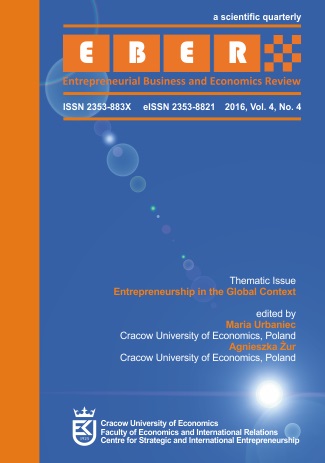 Summary/Abstract: Objective: The objective of this paper is to present the effects of special economic zones (SEZ) on the polarisation of public economic space in Polish regions. Research Design & Methods: The paper looks at both positive and negative effects of economic zones on the polarization of economic space in Polish regions. In an empirical analysis of internal and external effects of SEZs growth centres are identified. Centre of the polarised region, as a source of development incentives, characterised with a higher growth dynamics in comparison to the other part of the region is identified as a growth pole; while the centre of a polarised region being a source of crisis factors higher than in the region is identified as an anti-growth pole. Findings: In the result of conducted studies 8 growth poles, 19 centres of unstable economic situation have been identified, anti-growth poles has not been identified. Factors that result in the polarisation as well as its positive and negative characteristics were identified. Implications & Recommendations: The new model, which captures growing changes and can activate an appropriate action aimed at avoiding crisis can be used as a potential early warning system by the authorities of territorial units. Contribution & Value Added: The originality of this work lies in proposing a new methodological approach to identify poles and anti-poles. This approach can be applied for various tiers of taxonomic division for regions in various countries and forms of public aid.