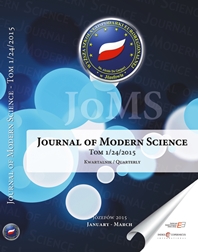 Cyberprzestrzeń jako zagrożenie bezpieczeństwa państwa.
The cyberspace as the threat of the state security.

Summary/Abstract: The development of teleinformatic technologies and the Internet causes coming into existence of new threats so as cybercrisises and cyberconflicts, cyberviolence, cyberprotesty, whether cyberdemonstrations about destructive character disrupting the accomplishment of significant tasks of the Civil Service with the participation of national and nonnational entities, including threat of triggering the cyberwar. Progress in the teleinformatics caused, that cyberspace, is not only contributing to the development of national entities (non-government) whether individuals, but is also the source of considerable risks for their safety. Operations in the cyberspace constitute the integral part of classical crises and political-military conflicts today (of wars), in frames of their hybrid character. The cyberspace became a field of conflict, on which we are happening to stand up not only with other states, but also with hostile organizations about extremist, terrorist character. With strategic aim in the area of the cybersafety the Republic of Poland, providing safe functioning for the Republic of Poland is in the cyberspace, in it of appropriate security level of national teleinformatic systems - of especially a teleinformatic critical infrastructure of the state - as well as crucial for functioning of the society of private economic operators, in particular of sectors being a member: financial, energy and health cares. One should emphasize that the protection of the cyberspace became one of the subjects most often taken up concerning the safety.