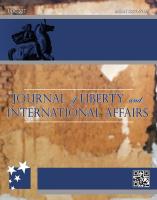 Summary/Abstract: This article aims to examine the ethnic minorities’ state of affairs in light of the constitutional reforms in Armenia since President Serzh Sargsyan decided to open the consultations with the parliamentary factions on November 2005. Policy-makers and representatives on behalf of ethnic minority groups have been taking relevantly place at the recent wave of democratic protests throughout the process of constitutional reforms in order to entrench a more stable multiparty system, independent judiciary, new balances between State and civic society. Hence, what is the reason to endorse those tiny ethnic groups such wealth of minority rights and political recognition? Why have ethnic Armenian minority groups not had objections or particular regrets in the constitutional reform processes? In turn, may this high level of internal recognition to ethnic minority groups foster assistance to Armenian minorities and protect Armenian heritage into the de facto entities of the South Caucasus?