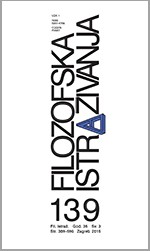 Summary/Abstract: The paper elaborates different articulations of the cinematic body and corporeality. Figure of body and the concept of corporeality can be comprehended in two different ways: as a film “corporeality” or as a “corporeality” in film, i.e. as a materiality of the film medium that is technologically determined and would otherwise be impossible, or as a materiality of the key film figures which are realized there in different forms. Also, the paper points out to the connection between the spectator’s body and the tactile image as articulated in the phenomenological approaches to cinema. In this context the paper explores the relationship between these three concepts focusing on diverse ways of representing the body in the genre, style and history specific film works. The focus is placed on the mechanics of body figures in American silent film comedy, attractions of the early silent film and on the representation of mostly woman’s, but also man’s body in the fictional works of the classical film style.