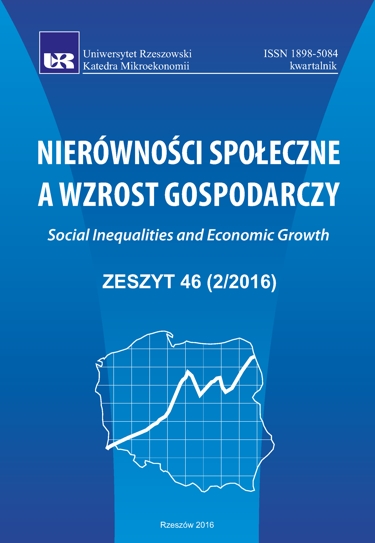 Summary/Abstract: The article discusses the issues of measurement scale, direction and structure of the emigra-tion of Poland in 2004–2013. The level, dynamics and directions of the emigration process were analyzed on the example of the population of the southern-eastern Polish region (based on own survey research results). The analytical approach of ‘the intentions of emigrants’ and the socio-economic specification of a ‘typical emigrant’ was conducted. In order to statistically analyze empirical material, the method of stochastic independence of the qualitative variables was used, specifying the socio-economic characteristics, which determines the process of emigration.The high level of emigration from Poland in the past decade was the result of instability in the labor market, which caused two waves emigration to countries (mainly to the European Union). It was estimated, that by 2013 2,196 thousand Poles emigrated. The value ‘emigration intensity’ indicates the main regions of the outflow of people: Podkarpackie, Świętokrzyskie, Podlasie and Lublin provinces. The research results confirm that the emigration intentions of southeastern Polish region are related to: socio-economic group, level of education, age of house-hold head and the degree of dissatisfaction with salary. Emigration concerns persons with lower age categories and a lower level of education. The tendency to emigrate refers to the people dissat-isfied with own salary, unemployed, employed by an employer (as a socio-economic group).The outflow of the economically active population causes adverse effects on the present and future quality of social capital in Poland: the demographic, social and occupational structure.