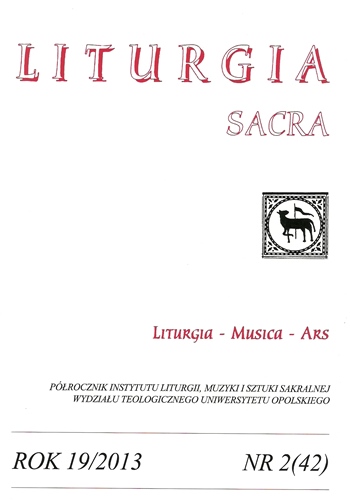 Summary/Abstract: The Cardinal J. Ratzinger assessing the implementation process of the post-conciliar reform of the liturgy pointed to three basic categories: intelligibility, participation and simplicity. These categories had also influence on the reception of the Constitution on the Sacred Liturgy in the Church in Poland. The intelligibility category in the reception of the liturgical reform largely depended on its understanding by the priests and the lay believers. To understand the liturgy there were needed: adequate instruction and education, i.e. formation. Simultaneously, the works on the texts of the liturgical books and existing documents were being continued that needed to be improved in order to increase an involvement of the laity in the liturgy and its improvement. Polish bishops noted that the new rites and new liturgical texts themselves will do not bring a new style in pastoral ministry. What is needed is a change of mentality of the faithful and a new motivation to participate in the liturgy. Referring to the indications of the liturgical Constitution they reminded that the task of priests is watching so as the faithful to participate in the liturgical celebrations “consciously, actively and fruitfully” (SL 11). The reception process aimed at that in order a participation in the liturgy to involve the inner life of the human being which in turn would manifest in the external activities. In the reception of the Constitution on the Sacred Liturgy in the Church in Poland it was also paid attention to the fact so that the structure of the liturgy was characterized by a “noble simplicity”, which is to point out to the simplicity of the infinite God. The liturgical revival that was introduced in Poland was not an attempt to break with the liturgical tradition. The intention of the bishops was so that new forms of celebration of the liturgy were to be referred to the already existing ones. Therefore the rituals were simplified but their essence preserved. What has become a repetition or addition without much spiritual benefit has been skipped. While certain elements which had been lost over the centuries were restored.