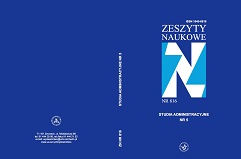 Summary/Abstract: The history of Jarocin dates back to 1887. It was created out of parts of Pleszew, Wrzesin and Srem Districts and covered an area of 720.5 square kilometers. After Poland regained its independence on 1 April 1932, Jarocin District remained within the same borders. As a result of an administrative reform carried out at that time, it became one of the largest Districts of Poznah Province. A large part of the liquidated Pleszew District was joined to it. During the occupation and the first years after the war, the District's borders did not change. On 1 January 1956, Pleszew District was re-established and the borders of Jarocin District from before 1932 were reintroduced. The District was liquidated on the basis of the Act of 28 May 1975 on the country's two-level administrative division. Presently, Jarocin District is one of 31 rural districts of Wielkopolska Province. It covers an area of 587.7 square kilometers and its population is more than 70 thousand people. It was established on 1 January 1999, as a result of the reform of the country's administrative division. It comprises Jarocin, Jaraczewo, Kotlin and Zerkow.