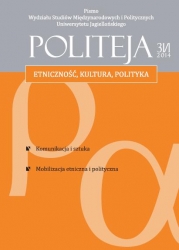 Summary/Abstract: Julio Medem’s movies reflect the problem of Basque identity in unconventional way. Here we find an analysis of tensions between the regional authorities and the government in Madrid and the problem of terrorism as seen from the perspective of victims and the separatists themselves. At the same time, Medem shows a traditional Basque culture with its unique flavour and socio‑political determinants. This tradition is reflected also in contemporary narratives, where the characters who live far from Basque Country are named after divinities from the Basque mythology and in the most unexpected situations reveal attachment to their small homeland.