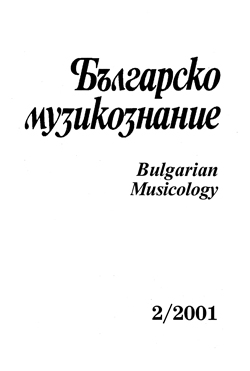 Summary/Abstract: The report is devoted to a topic that was really actual for the virtual research community in April and May 2000. During this period the peculiarities of the format Mp3 or the legality of the software product Napster and the site Mp3.com are problems largely discussed in the mailing list of IASPM as well as in some other mailing lists for music. This interest was provoked by some real events like the blocking of Napster in the Yale University after a demand from the rock group Metallica, but also refer to some relevant changes in the contemporary musical culture. This report is an informal continuation of the mentioned discussion and also an attempt to explain some of these changing patterns of music making and music perception today. However, in a way it defers from the largely used approaches to the field. First, in using one general view to the musical culture which interprets it as a diachronic simultaneity of the chronically different, independent and guided by individual paradigms of the development strata. Second, in interpreting a very specific/non-specific for the Study of Popular Music and IASPM community example from the field of so-called “serious music” (Mp3- availability on the pages of the official site of the Union of Bulgarian Composers).