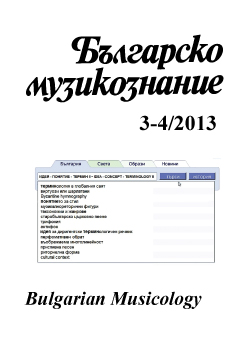 Summary/Abstract: The main objective of the study is the concept of lullaby, which in its diversity requires to examine different aspects of this term and to summarize the experience in dictionaries, encyclopedias and other analytical sources. The text tries to outline the panorama of this phenomenon and its terminological specificity. The term is not so often analyzed and in this meaning it is not clearly active. However, it is secondary problematized and updated, for example in connection with its role in music-making and education of the aesthetic taste in different degrees of mainstream schools. In this sense, the term appears again as a contemporary object of knowledge about music. Such terminological research investigates the truly complex phenomenon, which involves the interpretation of diverse scientific literature. It describes and analyzes various encyclopedic studies of lullaby (Chetrikov, Svetoslav (Ed.). Musical vocabulary. Sofia: Music, 1979; Muzikalynaya encyclopedia, Vol. 2, Moscow: Sovetskiy composer, 1974; Honegger, Marc. Connaissance de la musique. Paris: Bordas, 1996. The New Grove Dictionary of Music and Musicians, vol. 11, Oxford University Press, 1980, etc.), and then refers to some examples of popular articles and applied interdisciplinary texts.