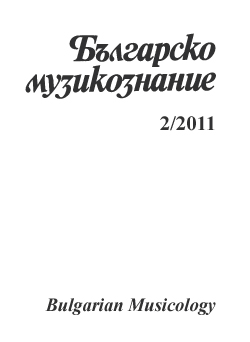 Summary/Abstract: The paper is dedicated to the contemporary ideas of composer’s work and performance practices, as the scientific disclosure of a specific subject expressed in the characteristic terminological replacement of “performance” with “music-making”. In a contemporary context, the phenomena can be connected both with the so called art music – compositional creativity, authorship and the musical work – as well as to the dynamic fields of traditional music and contemporary popular culture. Commonly publications dedicated to performance and interpretation include a range of philosophic, esthetic and semiotic topics relevant mainly to the problem of the identity of the musical work and the specific historically occurred separation between the composers’ and performers’ creation acts. The idea to distinguish the notion of music-making as a specific human activity from the notions performance and interpretation is activated the research in musicology. The “music-making” (in German - “Musizierung”) is defined as a form and a mediator of the musical experience, an activator and a content of the musical life through out the ages. Contemporary approaches are applied in this paper. The interpreted fields are many and varied, and at the same time significant for the paradigmatic shift, which is now established in different performing practices and different innovating view for the contemporary research of music (from Roger Sessions and Edward Toner Cone still Nicholas Cook, Peter Kivy, Lydia Goehr, Stan Godlovitch and Christophe Small with his idea for the “Musicking”). They are presented in parallel and are gathered around a common idea like the conception of music-making, as unfolded in the text.