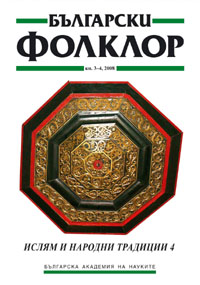 Summary/Abstract: The article is dedicated to the historiography about Enihan Baba, broadly understood and including specialized literature, regional studies and publications in the media. These diverse sources are presented as a field, where memory is constructed within the relation of the official historical narrative and the popular visions about the past. The survey on what has been written about Enihan Baba leads to some conclusions about the processes of formation, transfer and transformation of the specific historiography theses. In the materials from the end of 19th century and the first two decades of the 20th century the Mount of Enihan was described as a sanctuary of the Bulgarian Muslims and Enihan was not connected with legend about the Turkish conquest of the Rhodopa Mountain. This thesis was launched by P. Marinov and subsequently the script about Enihan the Conqueror turned into a stable legendary motive in the regional studies and from there – in the media. In the historiography writings about Enihan two often parallel stories have been launched about the past of the Mount Liberty (a “Thracian” and a “Bulgarian” one), which could be attached to the paradigm of Enihan as a sacred place, preceding the spread of Islam. Tracing the development of the diverse historiography theses through the years shows their close conditioning by the specific social and political context. For decades the state policy of integrating the Bulgarian Muslims to the Bulgarian nation has been accompanied by the thesis of their forced conversion to the Islam. Launching the version of the conqueror Enihan has been widely spread just in this ideological context. The political confrontation in the present day fills it with a new life, Enihan turning into their symbol. All these examples show the memory as a social construct, which is dynamic and changeable and closely connected with the identity of the memory group.