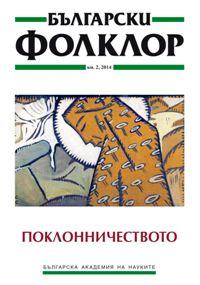 Summary/Abstract: The article is dedicated to the New Age pilgrimages, which became increasingly popular in Bulgaria in the late 20th and the beginning of the 21st century. It presents various types of pilgrimage destinations: natural landmarks (the Rila Lakes, Kamen Bryag, rock formations), as well as cultural sites with largely religious character (the Thracian sanctuaries Begliktash, Belintash, Perperikon; the Proto-Bulgarian centre near Madara; the localities of Rupite, Zlatolist and Krustova Gora, Petar Dunov’s grave in Sofia). Some specifics of the Bulgarian New Age pilgrimage are outlined, such as the interest in “Thracian” or “Proto-Bulgarian” sites and beliefs, the influence of Dunovism, the inclusion of the Orthodox religious centers in the New Age sacred geography. The New Age pilgrimages are seen as a manifestation of post-modern religiosity. The leading idea behind these practices is to acquire personal experience of the respective “energy sites” in search of spiritual transformation.