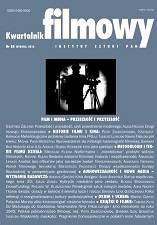 Kino designu, czyli o widzialności obcowania człowieka z powierzchnią
The Cinema of Design, or on the Visibility of the Interaction Between a Man and a Surface

Summary/Abstract: For some time now films appear characterised by an excess of images. The films are very different from everything up till now associated with the Tenth Muse. This excess means that the experience of this other cinema – a cinema, or perhaps maybe cinema no longer – is natural and quite common. Such films exhibit a large dose of improbability, they go beyond the standards of fiction established in the cinema, thus demonstrating the qualities of autopoiesis, and especially one of them: the feature of operative closure. It is expressed clearly in the escalation of impossible angles, and therefore gazes, which make the relation of the visible to the invisible become less important. It is simply erased. Moreover, these films imply a certain degree of initiation into these fictions, their recognition as a condition of the cinema experience and a significant level of consent to their adoption – the film comes across as a game, in the sense of playing with the images, where everything is possible. It mainly concerns surface phenomenon, located on the surfaces – especially those that stimulate the expectations of the viewer – and, as such, interface, so that it is the surface, free from the coercion of ontological depth, that becomes the proper environment of visibility. The author tries to investigate the essence of this phenomenon in terms of the attributes of cultural techniques of design, when the movie reaches the level of self-organisation previously absent (based mainly on the proliferation of the digital), focused not on the hermeneutic “depth”, but on surface”. This phenomenon has much in common with the redefinition of ontology of cinema in general: in the cinema of design, cinema as a matrix of perception disappears, and increasingly as a basic space of perception also.