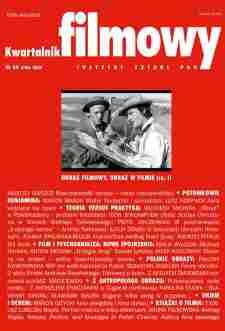 Summary/Abstract: The author argues that in film studies (especially in Polish film studies) not enough attention has been paid to the nature of image in film, forgetting that after mise-en-scène must come mise-en-images (which in digital cinema takes the form of mise-en-pages). In his article Gwóźdź focuses on early cinema. He considers so called local films, that is films made in a given region, by local or visiting film operators. These films registered local current affairs and were put on for local audiences. They were an open window, through which one could look in the mirror. Gwóźdź describes how people that were being filmed would behave, trying to attract the attention of the film makes by adopting various postures either according to their own ideas or under the instructions from the director and his assistants, who were responsible for preparing the scenery so that it would fit on the screen and a short loop of film. Sometimes the window would be put in motion by putting the camera in a moving car. However at this stage of cinema there was no awareness of reality beyond of the movie frame. Only that which was visible on the screen mattered. The only exception to this rule was the popular X-ray photography which overcame the taboo of the invisible. Situations where cinematographic image shows an x-ray image as a temporal and spatial “mise-en-abyme” are particularly interesting – an image of one medium in the image created by another medium. The viewer realizes that he is dealing with a reality framed by an image. Such films were often showed at country fairs as a curiosity. Already at the very beginnings cinema was dealing with image as a medium preserving time and memory.

Elektroniczne przestrzenie widzenia Electronic Spaces of Seeing 2002 Kina w drodze Cinemas on the road 2006 Raport o stanie polskiego filmoznawstwa Report concerning the state of Polish film studies 2010 Kino designu, czyli o widzialności obcowania człowieka z powierzchnią The Cinema of Design, or on the Visibility of the Interaction Between a Man and a Surface 2014 Film i media – przeszłość i przyszłość. Kontynuacje Film and Media – The Past and the Future. Continuation 2014
2023 © CEEOL. ALL Rights Reserved. Privacy Policy | Terms & Conditions of use
ICB - InterConsult Bulgaria core ver.2.0.1219